Another Tuesday Time Travel to the Roman Empire… 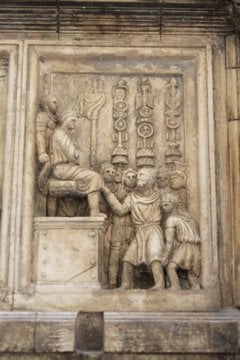 In any given case, the judicial process in the Roman Empire would begin with charges being brought against someone by private individuals. Public prosecutors were not part of the process. Thus the accuser(s) would be required to bring the accused before a bema (βῆμα), the seat on which a magistrate would sit to hear a case. The bema would move with the governor, so justice could be administered wherever the provincial governor happened to be within the province. One example of this can be seen in Acts 18:12-17. In Corinth, Paul (the accused) is brought before the bema of Gallio, proconsul of Achaia, by a certain group of Jews (the accusers). In this instance, Gallio chooses not to hear the case (Acts 18:15, 16; cf. the arrest and trial of Jesus).

The Purpose of Imprisonment

Incarceration itself was generally not part of the punishment of a crime. Rather, a prison was a holding place for the (1) defiant (whose release would be granted on the condition of some concession of obedience to the magistrate); (2) those awaiting trial; (3) those awaiting execution (Wansink, Chained in Christ, 28-32).

It is obvious from primary source material that imprisonment was often times brutal. The anticipation of harsh treatment was intended to instill a sense of fear among the populace. Beatings and torture might take place before and during imprisonment (cf. Paul and Silas in Acts 16.22-23). Conditions were anything but comfortable. Disease, festering wounds (especially in cases of bondage by chains), lack of sleep, and lack of a healthy diet made for misery. Prisons could be crowded, filled with darkness, devoid of personal necessities, and mentally distressing. It was not uncommon for prisoners to resort to suicide (Rapske, The Book of Acts…, 195-225; Wansink, 58).

The Shame of Paul’s Chains


During what I deem to be Paul’s second Roman imprisonment, Paul writes to Timothy in anticipation of a second trial and subsequent execution (2 Tim. 4:6, 16-18). Paul tells Timothy of those who have turned away in shame from him in his imprisonment (2 Tim. 1:15; 4:10, 16-17). Imprisonment was loathsome.

It’s no surprise why Paul could say, “The message of the cross is foolishness to those who are perishing” (1 Cor. 1:18ff). Paul suffered as a criminal (2 Tim. 2:9) because he proclaimed salvation in Jesus Christ (who suffered and died a criminal’s death). This is utter stupidity to the world (μωρία -to use Paul’s language). The Gospel seems upside-down. Who wants to take up the instrument of a criminal’s execution (the cross) and follow Jesus to the death (Mark 8:34)? Who wants to join Paul in suffering hardship for the Gospel (2 Tim. 1:8)? Not many, hence Paul’s point in the early part of 1 Corinthians. One way to silence the arrogant, divisive boasting in the church at Corinth is to remind them that genuine believers are but fools from the world’s perspective. Paul was willing to suffer great hardship for the advancement of the Gospel which ultimately led to a final imprisonment and execution. I hope to one day repeat his words: “I have fought the good fight, I have finished the course, I have kept the faith” (2 Tim. 4:7). But this implies we are enduring a struggle, running a race, and guarding the Gospel… Are we?

← Civil Submission in 1 Peter and the Contemporary Context
Red, White, and Blue Hermeneutics →

One Response to Roman Imprisonment: The Humility of Chains