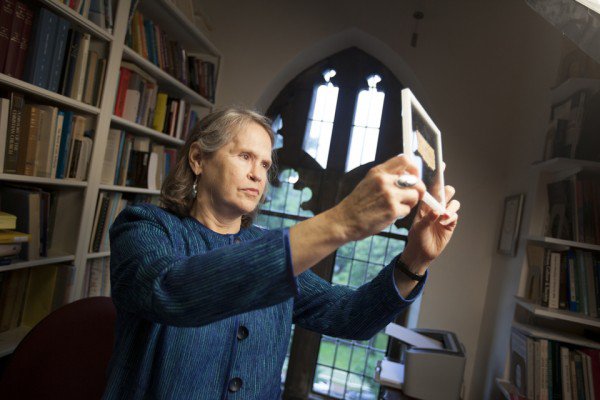 The latest issue of the Harvard Theological Review (free from here) has the long awaited articles regarding various analyses of the so-called Gospel of Jesus’ Wife papyrus, including a point-countpoint-counterpoint between King and Depuydt (TOC below). From Harvard Magazine:

The April 2014 issue of the Harvard Theological Review (HTR) includes King’s article (originally slated to be published in January 2013) discussing the fragment and its importance to understanding early Christian debates about whether wives and mothers could be disciples of Jesus. The issue also contains a counterpoint by professor  of Egyptology and ancient Western Asian studies Leo Depuydt of Brown University, who writes that he is certain that the text is a modern forgery. Depuydt’s analysis, which predates the scientific findings, points out that a forger could have written with lampblack on ancient papyrus. Infrared microspectroscopic analysis of the ink and papyrus, however, found nothing to suggest that they had been “fabricated or modified at different times.” In a rebuttal, King finds Depuydt’s textual analysis unpersuasive.

Now the scientific dating of the papyrus and the ink (which is not ink at all, but rather lampblack, a pigment often used in ancient Egypt for writing on papyrus) indicate that both are consistent with an ancient origin.

Because the fragment is so small, carbon-dating it proved troublesome. Researchers at the University of Arizona called into question their own results—which dated the papyrus to several hundred years before the birth of Christ—because they were unable to complete the cleaning process on the small sample of papyrus with which they were working, and felt that might have led to spurious results. A second carbon-dating analysis undertaken by Clay professor of scientific archaeology Noreen Tuross at Harvard and the Woods Hole Oceanographic Institute dated the papyrus, and a separate one (also believed to be of ancient origin) with text from the Gospel of John to approximately A.D. 700 to 800.

The relevant articles to GJW in this issue HTR 107.2:

James T. Yardley and Alexis Hagadorn, “Characterization of the Chemical Nature of the Black Ink in the Manuscript of The Gospel of Jesus’s Wife through Micro-Raman Spectroscopy” (162-164).

Leo Depuydt, “The Alleged Gospel of Jesus’s Wife: Assessment and Evaluation of Authenticity” (172-189).

These are fun stories: In January, nine papyri documents almost 2,000 years old were discovered by a student in the Luther College library archives, where they had remained hidden in a cardboard box for decades. Luther sophomore Brittany Anderson was conducting a routine inventory of the papers of the late Orlando W. Qualley, longtime professor… END_OF_DOCUMENT_TOKEN_TO_BE_REPLACED

Ronald Huggins has a helpful post clarifying what Hindu texts actually say about Krishna, contrary to more popular claims circulating in the West which are sometimes used to imply that key elements of the story about Jesus in the Gospels are derivative from the Hindu story. The Claim that Krishna was a Virgin Born, Crucified… END_OF_DOCUMENT_TOKEN_TO_BE_REPLACED

Ben Witherington has a series of interviews going with N. T. Wright. The most recent (the second) had some intriguing bits and pieces. I especially enjoy hearing scholars recall those influential works they read earlier in their career. My own combination of K[aesemann]’s rejection of B[ultmann], and Caird’s exposition of the OT view, all coming… END_OF_DOCUMENT_TOKEN_TO_BE_REPLACED

Looking for a good excuse to visit Australia? September 27–28, 2013 at Macquarie University: “Observing the Scribe at Work: Knowledge Transfer and Scribal Professionalism in Pre-Typographic Societies.” If I were in Sydney this Fall, I would attend. More about the conference: ‘Observing the Scribe at Work’ will bring together specialists in pre-modern societies of the Mediterranean… END_OF_DOCUMENT_TOKEN_TO_BE_REPLACED

According to Richard himself, the end is near (“within weeks rather than months”) for the publication of his Seven Congregations in a Roman Crucible:  A Commentary on Revelation 1-3. A few reasons I am looking forward to reading it: 1. He will interact extensively with primary sources (and not just literary texts!), yet attempt to give context when he… END_OF_DOCUMENT_TOKEN_TO_BE_REPLACED

Finally found a little time to summarize the debate my institution (MBTS) hosted as part of a Dead Sea Scroll’s conference. I’ve noticed a mention of the debate recently popping up over at the Textual Criticism blog, a post actually highlighting the debate which took place the night before at a local church. My post… END_OF_DOCUMENT_TOKEN_TO_BE_REPLACED

Richard Fellows recently suggested the possible connection between the name “Epaenetus” and benefaction: Now, the name “Epaenetus”, means “praised/commended”, and, like “Stephanas”, also belongs to the semantic field of benefaction. There are numerous inscriptions in which beneficiaries agree to “praise” a benefactor, and Rom 13:3 also appears to use the term in connection with benefactions… END_OF_DOCUMENT_TOKEN_TO_BE_REPLACED

Here’s to a time traveler of yesteryear, Colin Hemer, a classicist turned New Testament scholar. His untimely death cut short what was sure to be another productive decade (or two) of scholarship. According to those who knew him well, it seemed that the ink from his pen had just really begun to flow. His final… END_OF_DOCUMENT_TOKEN_TO_BE_REPLACED

…And from home. The Stoa Consortium notes that the ruins at Pompeii are now available via Google street view. (It doesn’t beat being there). END_OF_DOCUMENT_TOKEN_TO_BE_REPLACED