“For, I think, God has exhibited us apostles last of all, as men condemned to death; because we have become a spectacle to the world, both to angels and to men.” — 1 Corinthians 4:9

Last week we reviewed an article* by V. Henry T. Nguyen on Paul’s use of the ‘spectacle’ metaph 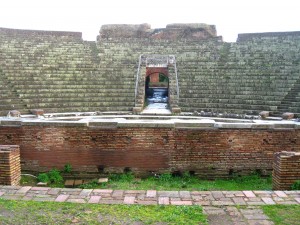 or in 1 Cor. 4:9. Essentially Nguyen suggests that the spectacle metaphor Paul uses is not a triumphal procession nor a gladiator show (in the proper sense), but a spectacle in which noxii, defenseless criminals condemned to death, would be brutally murdered. With this in view, I suggested how the metaphor fits into the argument of 1 Corinthians:

The point of Paul’s metaphor is to vividly illustrate what is to be expected for those who embrace “the foolish message of the cross” (1 Corinthians 1:18ff). Paul sarcastically claims that the Corinthians “have become rich…have become kings” (1 Corinthians 4:8), but he says that he has become the refuse and scum of the world. What a contrast!

But before leaving this topic, I want to highlight one other significant point that Nguyen makes in the article: Paul’s choice of the spectacle metaphor would resonate well with citizens of Corinth given the city’s high regard for such events. The significance of this observation cannot be overstated. Paul often uses metaphors which are especially familiar to the recipients of his letters (a fact hammered home by one of my professors, F. Alan Tomlinson!). Not only does this highlight the importance of understanding relevant background information behind various metaphors in Paul’s writings, but it also suggests something about the kind of communicator Paul was.