“And when you are praying, do not use meaningless repetition as the Gentiles do, for they suppose that they will be heard for their many words.” — Matthew 6:7

As Jesus teaches on prayer in Matthew 6, he transitions from the example of “the hypocrites in the synagogues” (Matt 6:2, 5) to “the Gentiles” (Matt 6:7). Commentators generally understand Jesus’ condemnation of “using meaningless repetition” (βατταλογήσητε) and “many words” (τῇ πολυλογίᾳ) as either (1) formulaic and legalistic repetition of intelligible prayers; or (2) pagan magical incantations (probably unintelligible gibberish). I lean heavily toward the first view, not least because of the prevalence of repetitious intelligible prayers carried out in the Roman culture (both private and public).

‘Repetition’ and ‘Many Words’ in Prayer


With respect to the first view, Nolland (NIGTC) refers to the repetition of “names of Gods, petitionary formulas, etc.” (284). This is an accurate (though unfortunately brief) description of what is typical in Roman prayers. Classicist Jo-Anne Shelton has a nice treatment of the subject in her sourcebook, As the romans Did (363-380). She notes that Roman prayers typically included “an address to the deity, a catalogue of his or her ancestry and powers, the reminders of a previous good relationship and an appeal for assistance” (366). To illustrate how formulaic Roman prayers were, she includes a bit from Pliny the Elder, Natural History 28.2(3).10,11, worth quoting in full:

It apparently does no good to offer a sacrifice or to consult the gods with due ceremony unless you also speak words of prayer. In addition, some words are appropriate for seeking favorable omens, others for warding off evil, and still others for securing help. We notice, for example, that our highest magistrates make appeals to the gods with specific and set prayers. And in order that no word be omitted an spoken out of turn, one attendant reads the prayer from a book, another is assigned to check it closely, a third is appointed to enforce silence. In addition, a flutist plays to block out any extraneous sounds. There are recorded remarkable cases where either ill-omened noises have interrupted and ruined the ritual or an error has been made in the strict wording of the prayer (372).

The Suovetaurilia was a sacrifice ritual named after the three animals which were required for the event: a 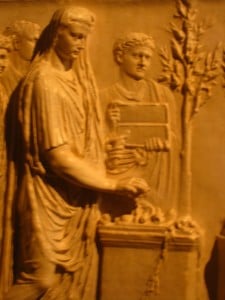 pig, sheep, and bull. In the pictures (above and right), you’ll notice one person preparing the altar with a head covering (perhaps about to pray). To his right stands one reading a formulaic prayer, likely to be repeated line by line by the one with his head covered. It seems that in the Roman view, strict adherence to a formula would obligate the god or goddess to respond in kind.

In stark contrast to this, Jesus advises that prayer be done in secret (emphasizing sincerity, not condemning pubic corporate prayer altogether) and in humility. One should not think to obligate God by some formula. Rather, one ought to pray to God as a dependent child makes request to a Father (Matt 6:9-13). In my view, Jesus gives a model for prayer (rather than a strict formula!), but in any case, he clearly commands that prayer be done with sincerity and humility, recognizing one’s needs and the ability of the Father to provide for such needs. Prayer is no doubt petition at its core, but in Matthew 6, Jesus challenges the crowds regarding the attitudes and motives underlying prayer.

Update: Mike points out an important question: How Roman was first century Palestine? Feel free to jump in below!

11 Responses to How to Pray: Two Ancient Views