I am nearing the halfway point of Watson on a close read (i.e., every word, every footnote), and I found Markus Bockmuehl’s recent JTS review to be a nice summary overall. I also agreed with many of the his critiques. One small point I wish Bockmuehl would have expanded (even with just an extra sentence):

In particular, the argument from the implausibility of non-Markan, non-Q ‘coincidences’ may well attract critical attention from the friends of Q. But from another perspective it also seems less compelling the more one accepts the influence of a lively culture of individual and collective memory and performance… 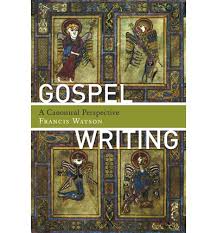 Bockmuehl follows this up by noting how little Watson deals with orality and memory–a criticism with which I agree. But this bit I’ve reproduced above seems to me unclear. The first sentence is true enough. But the second only partially. On one hand I agree. For example, the ‘coincidence’ (on the 2ST) that Matt and Luke both include genealogies (independent of one another) could be tempered by allowing for the influence of orality/memory. On the other hand, collective memory, orality, or performance seem to me unable to forcefully explain why, according to Watson, Luke and Matthew both favor the Q structure over Mark. Watson’s big point in the relevant section is that Matthew and Luke agree strikingly often in how they incorporate non-Mark material into the Markan framework–a coincidence if in fact Matthew and Luke did not ‘know’ each other.

So yes, I think a few of Watson’s Q ‘coincidences’ can be tempered when considering orality and collective memory, but other ‘coincidences’ less so, especially those dealing with authors’ editorial procedures that follow from 2ST.

A few other excerpts from Bockmuehl:

Heuristically if perhaps unwittingly, Watson’s position on Thomas resembles the approaches of Robinson, Koester, Funk, Crossan, and others who believed that the earliest gospel sources consisted primarily of disembodied sayings with at this stage little or no interest in the person of Jesus or in ‘what he did and suffered’ (which for Aristotle defined history, Poetics 1451b 11).

…At the same time, the ‘authoritative core’ argument matters especially for the four gospels. Questions of their early date, apostolic attribution, and content may of course be historically contestable; but they did in fact matter to second-century Christian writers—and the answers given did not apparently vary over time. But those ancient questions and answers are here dismissed as (it seems) methodologically irrelevant, historically worthless apologetic after the fact.

…Conversely, and perhaps more importantly, the second and third centuries already produce scholia (or indeed commentaries) on John, Matthew, and Luke—whereas it is presumably significant that none of the apocryphal gospels ever appears to have attracted any commentary tradition.

…And yet there is not a shred of evidence that any of the four gospels were ever serious candidates for exclusion (even Mark, who was rarely read; or John, whom a few crotchety anti-Montanists in Rome apparently disliked)—or, conversely, that any others (even Thomas!) were ever seriously considered for inclusion or achieved remotely comparable breadth of literary circulation, liturgical reception, or exegetical comment.