In New Testament times, women’s hairstyles held a place in culture not too different from American culture today. Certain styles were popular for a while, but would soon give way as some new fashion became the latest vogue. Just as popular actresses or other prominent cultural figures influence women’s hairstyles today, so it was in NT times. Remember “the Rachel” from the 90s? (If I’ve heard of it, it must have been a big deal!)

Jennifer Aniston will forever be remembered as the cause of the biggest hair craze of the 1990’s – “The Rachel” hairstyle! The bouncy, layered, angled shag sent women running to their salons demanding “The Rachel”. Even after she grew out the “Friends Haircut”, Jennifer was still well known as a trend setter for hairstyles (hairstyle.com).

In the ancient world, the hairstyles of prominent women would be evident on coins circulated 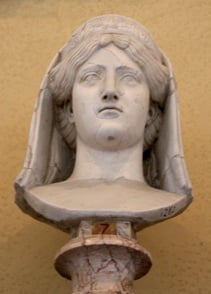 throughout the Roman Empire (which might display the emperor’s wife, for example) and on statues displayed in frequented public venues. In other words, the hairstyles of the ‘rich and famous’ would be easily propagated throughout the Empire by these means.

Hairstyles would often reflect one’s own status in society as certain styles would require the expense of a hair dresser (a slave). Cynthia Thompson comments:

In the course of the first century CE. a series of more elaborate hairstyles developed. Women, of the upper classes at least, wore increasingly complex and higher curls around the face. These coiffures required leisure to construct them, sometimes by means of a curling iron and often with the help of a slave.*

…And [your hair] was easy to manage, naturally curly, and didn’t cause you any trouble. You didn’t have to worry about hair pins or combs being caught in tangles and hurting you when they were pulled out. Your hairdresser was never bruised or scratched (306).**

Who cares about hair?

Peter does, but why? In the context of 1 Peter 2:11-3:12, he has argued that Christians should submit to various authorities (the emperor, governors, slave-masters, and husbands) for the sake of Gospel-witness, even in the face of mistreatment. It seems that in the case of certain women, Peter wants the focus to be on behavior, not the externals. For more on the context, see previous related discussions here.

**Shelton, Jo-Anne. As the Romans Did: A Sourcebook in Roman Social History. Oxford: Oxford University Press, 1998.

4 Responses to Ancient Hairstyles and the NT