Recently I was participating in an academic conference where one senior scholar mentioned their involvement at a recent colloquium (cf. report) discussing 29 homilies on the Psalms recently (re)discovered and attributed to Origen. At this I noticed a bit of astonishment amongst a few that seemed to indicate this news was not as well known as one would expect since these homilies were discovered in April 2012 and reported within two months. In any case, this prompted me to draw together the following:

First, the manuscript in question can be viewed online, and has been available online at least since shortly after its discovery, but likely longer (I have not found the date it was made available online). Also a critical edition is now published: Lorenzo Perrone (ed.)  Die neuen Psalmenhomilien: Eine kritische Edition des Codex Monacensis Graecus 314 (De Gruyter, 2015) [TOC online]. For a comparison of the homilies in this manuscript compared to what we find in Jerome (Epistle 33) and Rufinus’ Latin, see the chart from Perrone at the bottom of this post.

Some significant dates of the discovery and aftermath with links:

10 April 2012: After the Easter holiday, Pradel confirms that these look like homilies of Origen.

21 May 2012: Lorenzo Perrone (U. of Bologna) is contacted to become an advisor by Anna Pontani of Padua University. Perrone was able to access the manuscript online immediately.

11 June 2012: The Bayerische StaatsBibliothek gives a press release on the discovery, translated the same day by Roger Pearse. Alin Suciu excerpts the press release on his blog and provides updates, among which includes: “Dr. Lorenzo Perrone (University of Bologna), who identified Origen’s homilies, will soon present his discovery on this blog. Stay tuned.” Updates also include information on the arrangement of the homilies.

12 June 2012: Alin Suciu publishes a letter from Lorenzo Perrone (letter dated 10 June) which summarises the discovery. Some of the content of this letter can be found in Perrone’s publications on the subject, including, “Rediscovering Origen today: First Impressions on the new collection of homilies on the Psalms in the «Codex Monacensis Graecus» 314” in Studia Patristica Vol. LVI (2013) [online]. From the letter:

On the 21st of May, a day after the first severe earthquake since centuries began to shake my region, I was asked an expertise on a Greek manuscript of Munich.

Prof. Anna Meschini Pontani, from Padua University, informed me that Dr. Marina Molin Pradel, who is preparing the new catalogue of the Greek manuscripts of the Bayerische Staatsbibliothek, wished to submit to my attention a discovery she had made on Holy Thursday. While examining the content of Codex Monacensis Graecus 314 (11th-12th century), an anonymous collection of 29 homilies on the Psalms, she discovered that the manuscript included the Greek text of four of the five homilies of Origen on Psalm 36 (H36Ps I-IV). Moreover, she noticed that the list of the other homilies corresponded to a large extent to that presented by Jerome in his Letter 33 to Paula, the most important group being the series of nine homilies on Psalm 77.

I worked hastily in the following weeks to go through the considerable manuscript (371 folios) and check its content. More and more, albeit still provisionally, I have come to the conclusion that we have to do with a lot of lost homilies of Origen. My conviction is supported, among other things, by the exegetical treatment presented by the homilies, the doctrinal elements they preserve, the stylistic features which are typical of the great Alexandrian. In addition, some excerpts of these homilies were already known to us under his name in some catenae fragments edited in PG 17 and the Analecta Sacra of Pitra, especially with regard to Psalm 77.

Only a thorough examination of the texts transmitted by the Codex Monacensis Graecus 314 will permit to extend with reasonable certainty the attribution to Origen of all the remaining homilies or of part of them, besides the Homilies I-IV on Psalm 36.

I have already begun with the transcription of the manuscript and hope to complete it before the end of the summer, in order to make the texts accessible to scholars. Together with my colleagues Chiara Barilli, Antonio Cacciari and Emanuela Prinzivalli I plan to prepare without delay a critical edition of the homilies.

Marina Molin Pradel will present her discovery and offer some samples of the manuscript in the next issue of Adamantius, due to be published before the autumn.

A series of initiatives are planned to announce the discovery of the new texts to the scholarly world and to promote their knowledge and study.

On monday the 11th of June the Bayerische Staatsbibliothek will release a public statement about the discovery.

A seminar will take place at Padua University the 25th of June and a day-conference is planned for the 5th of December in Munich at the Bayerische Staatsbibliothek.

Together with the colleagues of the Italian Research Group on Origen and the Alexandrian Tradition we plan a conference in Bologna next February, exactly one year after the one devoted to the prospect of a new edition of Origen’s commentaries on the Psalms, in cooperation with the colleagues of the Berlin-Brandenburgische Akademie der Wissenschaft.

At the time we were submerged by the snow no less than by the uncomfortable impression of the heavy task still waiting the editors of the catenae fragments. Now, in the middle of renewed quakes, we have been given an unexpected gift that we would like to share with all those who love Origen.

Cod. Graec. 314 of the Bayerische Staatsbibliothek in Munich is a parchment manuscript from the 12th century containing 29 anonymous homilies on the Psalms: two homilies on Ps. 15, four on Ps. 36, two on Ps. 67, three on Ps. 73, one on Ps. 74, one on Ps. 75, four on Ps. 76, nine on Ps. 77, two on Ps. 80 and one on Ps. 81. The four homilies on Ps. 36, thanks to the comparison with the Latin translation made by Rufinus of Aquileia, are certainly to be identified as texts of Origen, but also the unedited homilies appear to go back to him. This article illustrates the history of the manuscript and its cataloguing, together with a short physical description of it. Further, it explains the methodic approach followed by the author to identify the unknown preacher. The presentation is accompanied by sixteen tables: nrs. 1-8) incipit and desinit of the four homilies on Ps. 36 juxtaposed to the corresponding passages in the Latin translation of Rufinus; nrs. 9-14) the catenae excerpts from the first homily on Ps 36 (PG 17) compared with the corresponding passages in the Munich codex; 15) a synopsis of the content of Cod. Graec. 314 and of the eusebian list of Origen’s writings in Jerome, Ep. 33; 16) a comparison between a passage from the 5th Homily on Ps. 77 (f. 264r-v) and the catenae excerpts edited by Pitra and Gallandi 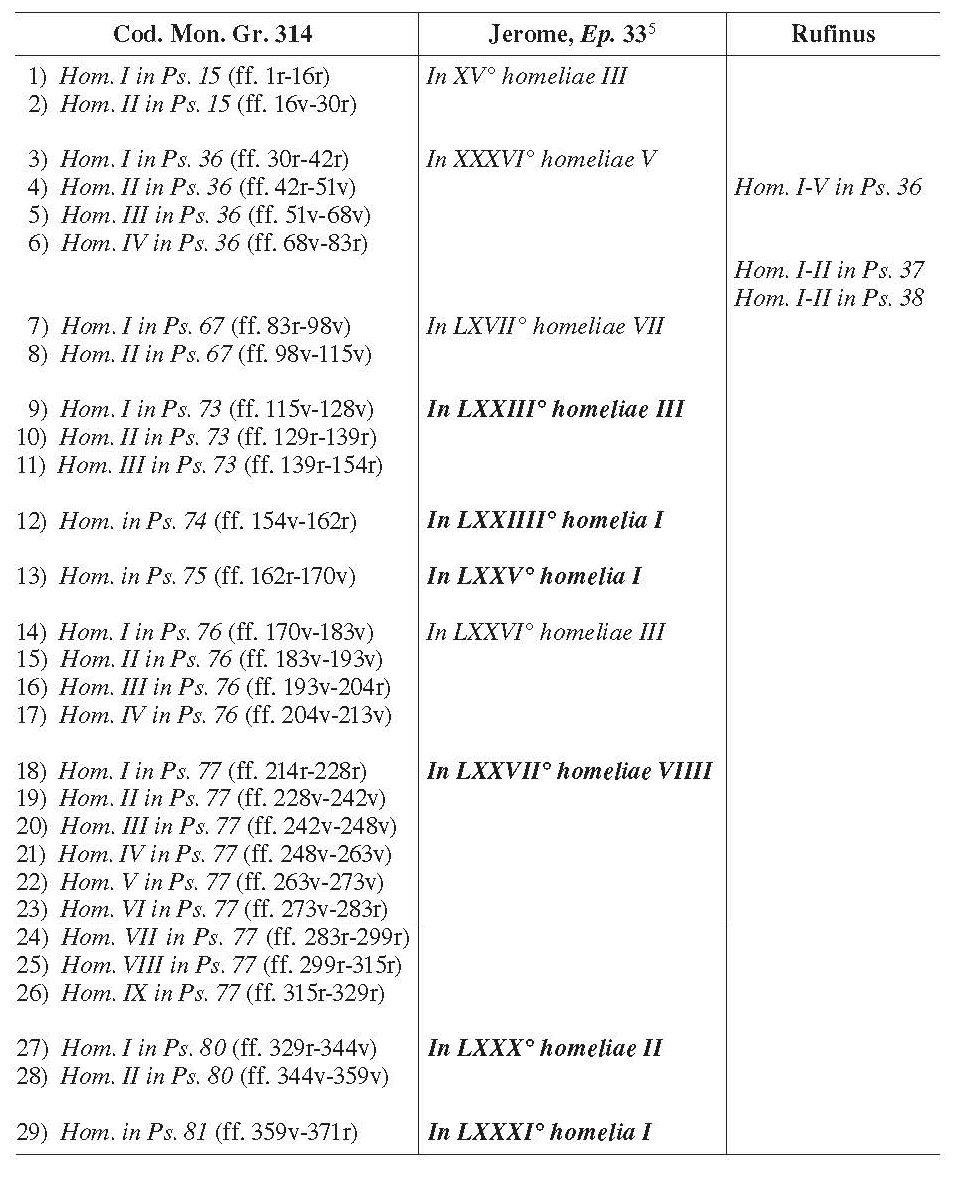 2 Responses to The ‘Discovery’ of 29 New Homilies on the Psalms Attr. to Origen